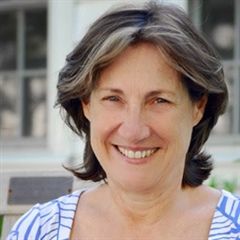 Elected in 2015
Resident of Greenwich, CT
Bank Street College of Education - M.Ed.
University of Maine - Law Degree
Bryn Mawr College - A.B.
Vision Committee: Learning
As a lawyer, Margaret "Peggy" Sarkela served as Associate Secretary and Counsel of the American Reinsurance Company. Her interest in education began when she was invited to join a program at Sarah Lawrence College dedicated to empowering at-risk students and was further piqued when she served on an American delegation to the renowned early childhood schools of Reggio-Emilia in Italy.

A member of the faculty at Greenwich Academy, she was the Middle School Curriculum Coordinator and appointed Chair of the History Department. As a volunteer, Peggy served as Chair of the Board of the Christ Church Nursery School in Rye, New York; was a member of the Parents Committee at Phillips Exeter Academy; and a member of the Board of the Walnut Hill School. More recently she served on both the Advisory Board and the Leadership Committee of the National Partnership for Educational Access. She is a Trustee of Bryn Mawr College. Peggy joined REACH Prep in 2003 as Director of Education and became Executive Director in 2009.

Peggy served on the vestry and was Junior Warden of Christ’s Church in Rye, N.Y., and she has been a member of the Greenwich Youth Council and the Education Committee of the Greenwich Historical Society.

Peggy is married to John Curtis and they have two children, Sarah and John.
Back
St. Luke’s School is a secular (non-religious), private school in New Canaan, CT for grades 5 through 12 serving 25 towns in Connecticut and New York. Our exceptional academics and diverse co-educational community foster students’ intellectual and ethical development and prepare them for top colleges. St. Luke’s Center for Leadership builds the commitment to serve and the confidence to lead.