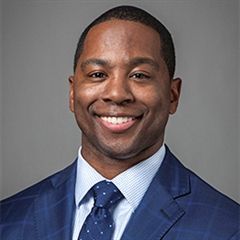 Myles is a Sales Associate at BlackRock, the world's largest asset manager. He is responsible for developing new relationships and enhancing existing relationships with financial advisors to aid clients' portfolio construction and increase firm sales. Prior to joining BlackRock, he spent four years at Putnam Investments where he held similar responsibilities. Myles has attained the Series 6, 7, 63, and 65 professional licenses.

Myles graduated from Amherst College where he earned his Bachelor of Arts degree in Political Science. He was a four-year member of the varsity football team, served as a co-captain his senior year, and is an active Amherst Football alumni member. He also co-founded the Council of Amherst College Student Athletes of Color, a support group for student-athletes of color on campus.

Myles graduated from St. Luke’s in 2013, where he co-captained the football team, was a student ambassador, and participated in theater.

Myles currently lives and works in Boston, MA.
Back
St. Luke’s School is a secular (non-religious), private school in New Canaan, CT for grades 5 through 12 serving 25 towns in Connecticut and New York. Our exceptional academics and diverse co-educational community foster students’ intellectual and ethical development and prepare them for top colleges. St. Luke’s Center for Leadership builds the commitment to serve and the confidence to lead.