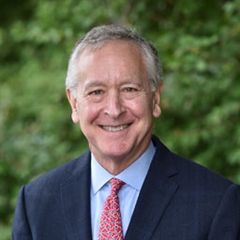 Mark Davis has been the transformative Head of St. Luke’s since 2002. Known for his ability to inspire innovation while preserving tradition, Mark has been at the helm of St. Luke’s exceptional rise. Mark joined St. Luke’s Phillips Exeter Academy where he was Director of College Counseling.  Before going to Exeter, he worked at The Taft School for seventeen years, serving in a variety of capacities including history teacher, Assistant Director of Admissions, Class Dean, varsity baseball coach, and Director of College Counseling.

As a forward thinker, Mark focuses on what students will need to thrive in the future. He writes often about ethical leadership, deeper learning, and mindfulness in education. Mark is a member of the National Association of Independent School (NAIS) Board of Trustees.

An avid sports fan and fixture on the sidelines of St. Luke’s athletic contests, Mark literally has baseball in his blood as his father pitched in the major leagues for the Kansas City Athletics. Mark played varsity baseball in high school, was a four-year letterman at Yale, and briefly coached and played in France after college.  He especially enjoys reading, playing golf and time with his wife Elisabeth and children, Matthew, Michael, and Sarabeth '16.
Back
St. Luke’s School is a secular private school in New Canaan, CT for grades 5 through 12 serving 25 towns in Connecticut and New York. Our exceptional academics and diverse co-educational community foster students’ intellectual and ethical development and prepare them for top colleges. St. Luke’s Center for Leadership builds the commitment to serve and the confidence to lead.