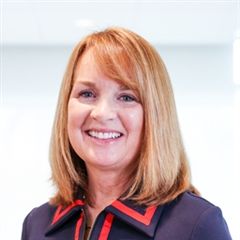 On July 1, 2022, Mary became St. Luke's Head of School. She joined St. Luke's after leading The Derryfield School for the previous ten years, during which time she created and executed a highly successful Strategic Plan and led the largest capital campaign in Derryfield history—funding several new spaces including a science and innovation center.  Prior to becoming Derryfield's Head of School in 2012, she served in various positions at the school, including Assistant Head of School for Faculty and Academic Programs (2010-2012), Dean of Faculty and Academic Programs (2008-2010), Head of Upper School (2006-2008), Academic Dean (2000-2001), and Director of Admission (1997-2000).
Prior to Derryfield, Mary worked at Newton North High School in Newton, MA as a history teacher and tennis coach. Earlier, she served as Director of Admission and Financial Aid, history teacher, and coach at The Pingree School in South Hamilton, MA. Mary began her career at Harvard-Radcliffe Colleges in Cambridge, MA, implementing young alumni giving strategies as Assistant Director of the Harvard-Radcliffe Fund.
Mary is a Dartmouth alumna and holds an M.Ed. in Teaching, Curriculum, and Learning Environments from Harvard Graduate School of Education, and a Ph.D. in Education and School Leadership from the University of New Hampshire. She is married to her husband, Chris, and has three grown children, Louisa, Polly, and Martin. A golden retriever named Hefty and an English mastiff named Cordelia are also part of the family.
Back
St. Luke’s School is a secular (non-religious), private school in New Canaan, CT for grades 5 through 12 serving 25 towns in Connecticut and New York. Our exceptional academics and diverse co-educational community foster students’ intellectual and ethical development and prepare them for top colleges. St. Luke’s Center for Leadership builds the commitment to serve and the confidence to lead.